In the years 1964-1969, through a grand development program, Stena evolves from being a passenger shipping company focused on shopping trips, into Sweden’s leading ferry operator. In 1970, they employ four ships on three different lines. Operations are carried out with Sweden’s two largest cities, Stockholm and Gothenburg, as bases. In the years 1970-71, the shipping company plans carefully in order to grow to fill much larger shoes. This means developing the capacity to meet an increasing demand.

On the Gothenburg-Frederikshavn line, operations continue with the new large ferry STENA DANICA and the much smaller Stena Nordica. Demand is growing and there is still space on the ships for expansion. Many expect Stena Nordica to be replaced by a sister ship STENA DANICA. Sessanlinjen’s building program is completed in 1971, and then they have two large sister ships in service on their route to Frederikshavn.

Stena GERMANICA sails between Gothenburg and Kiel. The ferry has a very small car deck with only three lanes for trucks or four lanes, plus shelves for passenger cars. Here, the capacity limit has already been reached. On the passenger side, more comfortable bunk space is also needed. The passengers are getting more and more demanding.

In Stockholm, POSEIDON continues the leisure trips that Stena have already phased out on the West Coast. It is still profitable, but in autumn 1971 the competition intensifies. The competitor Bror Husell Ålandslinjen starts up and becomes something of a “people’s shipping company” on the island. They buy DFD’s PRINSESSEN, which changes its name to PRINSESSAN. The ship has nearly 400 berths, pleasant lounge areas and can also transport a small number of cars. Ålandslinjen starts 24-hour cruises between Stockholm and Mariehamn. There is then no doubt that the little Poseidon’s days are numbered.

In 1970, despite high levels of bookings, STENA GERMANICA does not have not enough capacity to be profitable on the long Kiel line. What is needed is a ferry with a much greater capacity. On the Frederikshavn line, the situation is a little different. There, STENA DANICA represents the second generation of ferries and is tailored to the needs of the line. Here, growth in the cargo traffic is also happening faster than on the Kiel line.

The Danish company Moltzau Line has demonstrated the benefits of an extra loading deck for passenger cars with the vessel Travemünde, which in 1971 will be put into service on the Gedser-Travemünde line. Separating trucks and cars on different decks makes for more efficient loading and unloading. They also avoid the increases in truck traffic, preventing transport of passenger cars. Although STENA DANICA is a ferry of the right size, the traditional arrangement with regards to the car deck is a weakness.

In 1970, Stena decide not to build any sister ship to STENA DANICA. Instead they begin plans for a new series of ships. Pretty soon, the work is focused on the design of two types of vessels with similar hulls and engines. The first type will be a night ferry on the Kiel line and the other, a day ferry on the Frederikshavn line. The night ferries will have a full deck with cabins, while the corresponding space on the day ferry will be occupied by an extra deck for passenger cars. Both types of vessels are 125 meters long, which is the length of the Stenpiren dock. The Kiel ferries are built for traditional loading with five lanes for trucks, while the Frederikshavn ferries are given a greater width to allow six truck lanes abreast. This is quite unusual at the time.

The difference in width between ship types reflects the different needs of the ferry lines. The narrower hulls of the ferries to Germany offered greater possibilities for higher cruising speeds while maintaining fuel economy. The design was drawn up in the summer of 1970 by Stena’s technical department, headed by Helge Olofsson and in collaboration with Knud E. Hansen I/S in Copenhagen.

The orders were placed during the late autumn of 1970 at two shipyards in former Yugoslavia. This surprised some, but Titovo Brodogradiliste in Kraljevica had delivered the Finland ferries KAPELLA and MARELLA to Vikinglinjen shipping company just a few years previously. The shipyard thus had proven their solid ferry-building skills and had a good reputation. The Kiel ferries were ordered at this shipyard, while the Frederikshavn ferries were ordered from Jozo Lozovina Mosor Shipyard in Trogir. Even before Stena Line submitted their order, the shipping company AB Gotland had also ordered two ferries from Trogir. The Yugoslav shipyards were chosen because they could offer the most competitive price and delivery terms.

Stena also orders a series of cargo ferries at various Norwegian shipyards. The first will be named Stena Carrier and is meant to be deployed on the Gothenburg-Kiel line in 1970, where it shall have a cargo capacity that can better match demand. However, Stena receives a good price for the ferry which is chartered out to Canadian National instead. In 1971, a sister ship which is chartered to British Rail is delivered. Another sister ship is chartered the same year as a train ferry to the Deutsche Reichsbahn. A fourth ferry in the series will be sold in 1972 to British Rail.

Stena has previously conducted some successful chartering business with the ships Stena Nordica, Stena Baltica and Stena DANICA. This business division is further developed by the business with the Norwegian-built freight ferries. Trading of ships will become a large and profitable business for Stena.

The situation at Stenpiren in Vallgraven has been ideal for the shopping-focused leisure traffic, which was Skagenlinjen’s original business model. It was within walking distance from both the Central Station and Kungsportsavenyen and the rest of the city’s most central districts. Packed trips have created some chaos among the taxis, but there have not been any major problems. 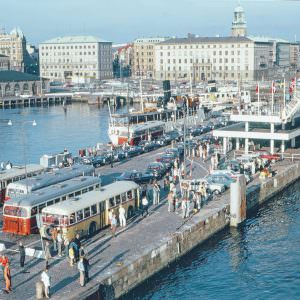 The problems came in June 1965 when Stena Line began bringing cars across the Kattegat. The parking spots at Stenpiren were limited and there was absolutely no space for trucks. It was only after the shift to  right-hand traffic in September 1967 that Stena Line was allowed temporary access to large areas for parking of trucks along the wharf. In 1970, it becomes obvious that Stenpiren is not in a position to handle the expected traffic for the new decade.

The conditions are also changing for other reasons. City leaders have decided to build a major thoroughfare with two lanes in each direction through the port, from the Tingstad tunnel via Västra Frölunda, towards Mölndal. The highway will be completed in 1973-74. The remaining available space at Stenpiren will then be minimal.

For traffic to Kiel, Stena Line has a modern and efficient terminal out in Skandiahamnen, with large storage areas and good service functions for the passengers. This location does not currently offer any competitive advantage. Non-motoring passengers have a long journey by bus or taxi and it is difficult for foreign tourists to find their way there. Moving all ferry service there is unthinkable. If Stena Line is to grow and gain a stronger position in relation to Sessanlinjen, it is important for them to concentrate all activities at a large facility in a central location.

The northern riverbank in the harbour is still completely occupied by port and shipyard operations. The only opening is on the other side of the river just southwest of Stenpiren, at Masthuggskajen. Since the 1910s, the area has been the centre for cargo traffic to England and the rest of the continent. Now, the loading has been switched to rolling handling and moved out to Skandiahamnen. At Masthuggskajen, there is room for a new ferry terminal. In early February 1970, after long negotiations, Stena Line reach an agreement with the port’s board of directors regarding the plan for the new building and the rights for the use of the land for a long time. After approval from the city council, received in March 2, 1971, the first steps are taken in building the ferry terminal, which will be ready in May in 1972.