1972 is the eventful year that Stena goes from being an upstart challenger to one of Gothenburg’s established shipping companies. The new, elegant terminal building on the southern shores of the river Göta marks the start of a new era in Gothenburg. Long before, the traditional harbor business left the southern river and moved to the Skandia Harbor, closer to the ocean and further away from the city center. Stena Line fills this void, occupying the historical port facilities on Gothenburg’s doorstep, write our history experts Anders Bergenek & Rickard Sahlsten.

Throughout the winter, construction work is being carried out at the new terminal on the southern river bank. The building was designed by architect Björn Westher and the project is led by Stena Line’s traffic manager Sture Mattson. The cost is estimated at SEK 14 million, of which Stena accounts for 11 million.

As of May 8, 1972, Stena Line migrates its administration, information, booking and quays to the new terminal. The maiden voyage takes place the same evening, with STENA DANICA making its nightly trip to Frederikshavn at 19:00. The official opening ceremony will take place just a few days later, May 11th.

In order to create additional marketing buzz around its new terminal, Stena Line buys a private round-trip boat called ÄLVPILEN (the “river arrow”) during the premiere year. It is used for guided boat trips. The price includes coffee and a Danish pastry in the new terminal restaurant.

The building on the quayside has concrete loading dock that protrudes onto the water, where cars and cargo can easily be loaded on the stern of the ferries. The Germany-bound ferries point upstream, and the Denmark ferries down. 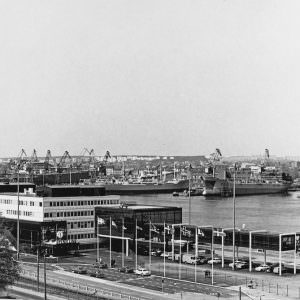 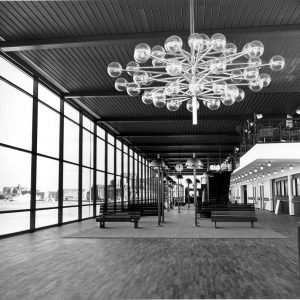 The ticket office and departures hall is located on the third floor, where the foot passengers comfortably arrive via an escalator or elevator from the entrance at ground level. The walls of the hall are covered in gold-plated glass to circulate the sun’s warmth. The passengers board the ferries via glassed-in walkways. In the departures hall there is also a small cafeteria.

An employee guide describes how staff should go about booking work, equipped with the most modern technical resources for the time. Telephone capacity has increased by 50 percent and telex capacity by 100 percent compared to previous terminals. Service staff is available between 06:00 – 02.30. The stated goal is that passengers, before coming onboard, will experience the same excellent comfort and service as on the Stena Line ferries.

In the mezzanine, a spacious 400-guest restaurant offers magnificent views of the harbour. Self-service is offered for travellers in a hurry, so they can grab a quick cup of coffee and a bite to eat. Table reservations are available for those who would like to enjoy an evening meal or a Sunday dinner. This restaurant is open between 08:00 and 20:00 — in 1972, of course.

The new terminal will mean a lot for the development of the Stena Line brand. To experience such space, air and light signifies prestige and luxury combined with modernity. The environment is reminiscent of an exclusive air terminal with different “gates”. The direct relation to aircraft is represented by the view of the ferries being loaded and unloaded — the tarmac of the sea. As a ferry terminal, Stena Line’s new facility is at least ten years ahead of its time.

As the Yugoslavian construction is delayed for about a year, Stena Line is forced to act quickly. Svenska Lloyd, a popular ferry company at the time, wrestles at this time with some major problems, inter alia, linked to passenger traffic between Gothenburg and London. The shipping company wants to sell one of its ferries. Stena Line buys Svenska Lloyd’s SAGA, renaming it STENA ATLANTICA. In mid-March 1972, she is introduced as a supplement to STENA GERMANICA between Gothenburg and Kiel. Finally, the line has received a second vessel, thus providing daily trips in both directions. STENA ATLANTICA has a luxurious interior but only 486 cabins. Stena Line fixes this by building a large accommodation facility in STENA GERMANICA, increasing its capacity to 808. The new ferry’s passenger car capacity is also very high, with room for 300 automobiles, but most of the car deck is tailored for transport of containers and unfortunately has insufficient height for trucks.

Up until this point, Svenska Lloyd was one of Gothenburg’s most prestigious shipping companies. Their passenger ships occupied a class of their own, comparable only to American liners. It’s really an omen that Stena Line in 1972 can take over SAGA and employ her in her own traffic. Times are changing in Gothenburg.

On July 7, 1972, the first new-built ferry from Yugoslavia, STENA OLYMPICA, is ready to be put into service. She replaces STENA GERMANICA, which for the remainder of the summer sails in parallel with STENA ATLANTICA. The result will be a success. In 1972, Stena Line transports 296,000 passengers, 56,000 cars and 6,100 trucks between Gothenburg and Kiel.

Now the daily trips between Gothenburg and Kiel are over. In order to use the ferries efficiently, beginning the 1st of July, they began to be employed for day trips between Kiel and Korsör. The crossing time of the 75-mile long stretch is four hours and 15 minutes. It was primarily German shopping travellers who were attracted to this line which quickly became very popular but not so profitable for the shipping company as it required a larger crew on the ferries.

In the autumn, STENA ATLANTICA is taken from Kiellinjen and replaced with STENA GERMANICA. Stena Line launches STENA ATLANTICA in September 1972 with a new route between Gothenburg and Copenhagen. The idea is that STENA ATLANTICA, which has capacity for 100 containers, will be contracted by Atlantic Container Lines and Johnson Line to run shipments on the new route. Stena Line also markets combination trips across Zealand, using the lines from Gothenburg – Copenhagen and then Korsör – Kiel. That combination will not be a big success. On the other hand, STENA ATLANTICA had a 24-hour schedule on every other trip, and it offers the opportunity for popular shopping cruises to Copenhagen.

A year of transition on the Kattegatt

On the Gothenburg – Frederikshavn line, the great STENA DANICA continues with the somewhat older and completely inadequate STENA NORDICA. Here is competition tough with the Sessan line, as this year it has two newly built and very spacious ferries in traffic at Frederikshavn. Jutland traffic is growing rapidly, and although Stena Line’s tonnage is insufficient, the financial results will still be satisfactory. This is a good year for Swedish ferry traffic. Few people realize the economic and oil crises that are waiting around the corner.

On the line to Denmark, two new ferries will be introduced in 1973-1974. It is a rocky ferry war fought between Stena Line and Sessan Line.

Hardening competition on the Sea of Åland

Within a few years, competition in traffic in the Sea of Åland, between Finland and Sweden, sharply increases as the Åland Line succeeds in purchasing PRINSESSAN’s sister ships, which are now being sailed as the day cruiser named BARONESSAN. These are two first class, large passenger ships that also offer good food and good service.

In this situation, it becomes increasingly difficult for POSEIDON to gain traffic. The high Swedish salary situation contributes to the difficulties. Stena looks after larger tonnage and new construction is also discussed. In Knud E. Hansen’s blueprint archive there is a 104-metre-long cruise ship, which is suggested to be in traffic for Stockholm-Mariehamn, on behalf of Stena Line. With few cabins onboard, it is obvious that the ship is going on day trips, not 24-hour cruises. Rather soon after the first blueprints are drawn up, the ship takes a new shape and is now planning a small car area to provide space for those passengers who want to spend their holiday in Åland. But in the end there will be no new construction the Åland cruiser. Instead, Stena Line chooses to buy a ship from Germany.

HADAG’s HELGOLAND has just completed a five-year charter for the German Red Cross as a hospital ship in Da Nang, Vietnam. In February 1972, the exclusive Helgoland cruiser is on her way home to Germany to be sold and Stena Line receives information about this. In Las Palmas, she is inspected by Roland Erkenberg, who works as a technical consultant for Stena, who gives the thumbs up for its purchase. Under his leadership, HELGOLAND is renovated at a berth in Gothenburg during March-June. The entire interior decor is renewed. The name changes to STENA FINLANDICA and the ship receives the German flag and Kiel as a home port. On June 7, STENA FINLANDICA goes on to Mariehamn, and Stena Line has two ships on the line. Now the war of the Ålanders islands is in full swing.

In 1972, Stena receives delivery of the STENA TRAILER freighter, which is immediately chartered. During the coming year, another six freight ferries will be built. Stena Line’s understands the business opportunities inherent in the freight ferries. However, it’s an activity that is kept economically and organizationally separate from Stena Line, whose sole task is to market and operate the company’s own ferry lines. /Anders & Rickard.

Many thanks to Anders Bergenek & Rickard Sahlsten for this comprehensive history! 1972 was a leap year, which certainly makes poetic sense in retrospect. All 366 days were action-packed for Stena Line as we made giant leaps towards becoming the established shipping company we are today. /Ylva.