Most anyone who lived in 1963 will remember that year. It starts out with a bitterly cold winter when the seas around Sweden are covered with ice and the shipping industry is faced with serious problems. Later in the year it is uncovered that the colonel pilot Stig Wennerström has been spying on Sweden on behalf of the Soviet Union. In November the president of the United States, John F. Kennedy, is shot in Dallas and the world is sent into a state of shock. 1963 is a very dramatic year.

What is later to become Stena Line is still named Skagenlinjen. ÖSTERSÖEN’s winter routes continue running until February and will then have to pause due to the ice situation. On Skagenlinjen, the planning for the coming season is already in full progress. The second hand market is carefully probed, especially in West Germany, in order to obtain suitable vessels for the start up of the season.

Also VISBY of the Gotland company, a robust steamship built in 1924 with ice-breaking features and a strongly modernised interior, is bought already in January and then waits by Hammarbyverken in Stockholm for delivery the coming spring.

At the Ekensberg shipyard, at Mälaren in Stockholm, the steamship BRYNHILD is put up for sale after several failed transport projects. Sten A. Olsson only signs a charter deal because the price asked by the shipping company in Gävle is considered to be too high. The intention is that BRYNHILD will start sailing by the middle of March. A slight delay occurs, however, when necessary reconstruction work is prolonged. When BRYNHILD is finally ready, she departs from Stockholm as SKAGEN I, pulling VISBY with her, now renamed as SKAGEN II. The new additions arrive in good conditions at Gothenburg. 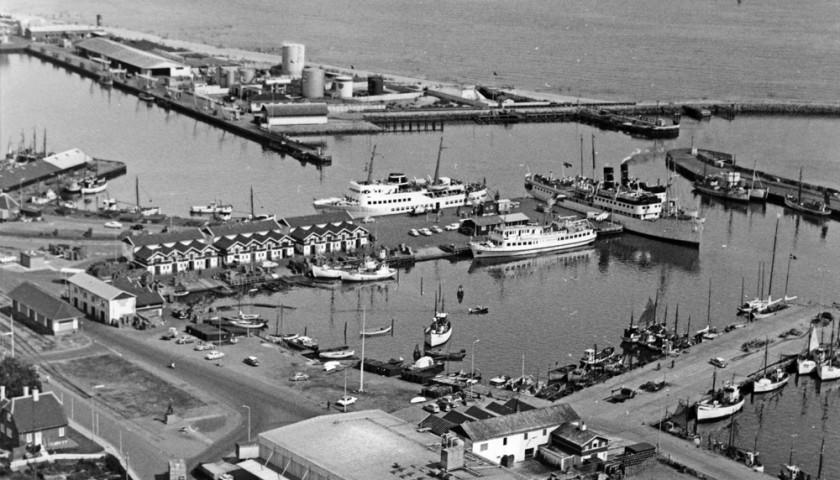 First out on the Gothenburg-Skagen line is the West German SEUTE DEERN with a capacity for 400 passengers. She opens the seasonal routes from Stenpiren in Gothenburg on the 14th of March 1963. Skagenlinjen is marketing the ship as the ‘Skagenexpressen.’ A few months, later she is replaced by the HEIN GODENWIND, also West German, and also known as ‘Skagenpilen.’ The German boats which sail during the summer from Hamburg or Cuxhaven to Helgoland are modern and very seaworthy. They are also to become greatly appreciated by the Swedish passengers.

On Walpurgis Night, SKAGEN I makes her first journey over the Cattegat and the runs the summer routes, as the German vessels are not available for rent. In the beginning the timetables are simple. The departure times are announced at the kiosks on Stenpiren and are sometimes announced in the press.

The charter deal for SKAGEN I runs through the 30th of August, and then the steamship is returned to the owners. She is pulled up at Ringön in Gothenburg. In the Skagen transport she is replaced by SKAGEN II, which continues for another four weeks until she is pulled ashore for the winter too. After this, it is to be SEUTE DEERN and HEIN GODENWIND that will take care of the off-season transport from Gothenburg.

On some occasions, the West German ships have problems with the strong eastern winds in the port of call in Skagen. The command then decides to go to Frederikshavn instead. That autumn, Skagenlinjen recognizes that it is possible to begin entering that port with a considerably larger vessel.

After negotiations in West Germany, a completely new and considerably larger chartered ship, HELGOLAND, comes to Gothenburg in order to start running the line Gothenburg-Frederikshavn. ‘Welcome to Frederikshavn,’ says the first page of the newspaper Frederikshavns Avis, with a picture of the new ship by the Isveark harbour. HELGOLAND, with room for 886 passengers, is provided with the marketing name ‘Frederikshavnspilen.’ Sten A. Olsson joins the opening tour and explains that they have now arrived to Frederikshavn ‘to stay.’ The price for a return ticket is now down to 5 kronor.

But an even bigger ship will be arriving to Skagenlinjen. About a month later, WAPPEN VON HAMBURG, the flagship of Hafendampfschiffahrt-Actien-Gesellschaft (HADAG), arrives to quay-berth 31 at the docks of Masthugget. Already on the following day at 10 o’clock the first route sets sail for Frederikshavn with the name ‘Frederikshavnsexpressen.’ She is back in Gothenburg around 7 p.m.

Through both of these giant ships the ‘German economic miracle’ of the post-war times enters the price-conscious world of Gothenburgers in a serious way. The large German ships offer passengers amazing travel experiences. The smaller Skagen boats also make more and more trips to Frederikshavn, which is now rapidly becoming the main destination of the shipping company. On one occasion, the 18th of November 1963, there are no less than four ships from Skagenlinjen at the same time in Frederikshavn. Up to 4500 people may simultaneously take over the town for shopping. These are glorious days for the

The routes from Gothenburg to Skagen and Frederikshavn become very profitable during 1963. On top of this, Skagenlinjen strikes some luck as the Swedish Systembolaget is hit by a long lasting strike. The ships of Skagenlinjen then secure thirsty Gothenburgers’ access to alcohol.

One line, Lysekil-Skagen, is opened in June 1963 and run by the East German, chartered passenger ship SEEBAD WARNEMÜNDE. The timetable is the well-known departure in the morning from the Swedish harbour and a return in the evening after, in this case, a four hour-long stop for shopping in Skagen. The price for a day trip is 15 Swedish kronor which today corresponds to about 280 kronor. The price for the ticket is generally returned to the passengers by the profit they make from the cheap purchases on board. The route is an immediate success and practically every sailing is fully booked.

The renovation of SKAGEN II has been prolonged and it takes until the beginning of July for her to be put to work on Lysekilslinjen. This means that the line is equipped with a vessel that is very suitable for evening trips, too. The timetable is extended with evening/night trips on Fridays and Saturdays. The old steamship is, however, not always capable of adhering to the timetable. The evening/night trips are cancelled in mid-August.

When SEEBAD WARNEMÛNDE is made available, yet another line is opened between Uddevalla-Skagen. In Uddevalla the docking place is the Steamboat docks just by the bus station in the very centre of Bäveån. The route is planned in the same way as Lysekilslinjen with reservation for the considerably longer journey at sea.

The Uddevalla line targets travellers from the Trestad area who, because of the roads in those days, have a long way to go to both Lysekil and Gothenburg. Bus connections are organised from both Trollhättan and Vänersborg. Beginning on the 22nd of August, the line is extended there and, a few days later, into docking at Marstrand as well.

The Skagen line is established during this first summer of the shipping company in Halmstad, as well. During a short two months a Halmstad-Helsingör line is frequented. Here too the cruise is organised according to the plan that has proved so successful in Gothenburg. In this case, a rented East German ship, SEEBAD

HEERINGSDORF, departs in the morning, sets off a few hours for shopping in Helsingör, and returns in the evening to Halmstad.

In Halmstad, there are conflicts with the Lion Ferry owned by Bonnier, which runs the car ferry route between Halmstad and Århus. Skagenlinjen has obtained an attractive quay-berth just south of the Castle Bridge in the city centre and this benefit is fought intensively by the Lion Ferry. Skagenlinjen’s intensive advertising campaign also raises debate in the local press.

The lines from Uddevalla, Lysekil and Halmstad are run only as summer lines and the service is cancelled when the season is over. It will return to Lysekil the following year, but not to the other two towns.

In the spring of 1963 Sten A. Olsson is nurturing plans to convert his privately owned cargo-ship STEFAN into a passenger ship. It is announced in the press that the work is to be done at the Sölvesborg shipyard, that the line is to be Lysekil – Skagen, and that its name will be SKAGEN III. These plans are shelved, however, when Skagenlinjen instead comes upon the opportunity to buy a used car ferry.

At the end of May 1963, the newspaper Skagens Avis writes that the Skagen line has had such great successes that the shipping company will buy Grenå – The Hundested ferry ISEFJORD, built in 1935. It is meant to be put on the Gothenburg – Skagen line on the 15th of June. But the recently bought ISEFJORD with a capacity for 350 passengers and 60 cars will never arrive to Gothenburg. It is rumoured that Sten A. Olsson considers her to be to old and ugly to be suitable there. Instead, she is sent to a shipyard in Kiel for reconstruction. As opposed to the Skagen boats, ISEFJORD gets a blue hull and KL instead of S on the chimney.

A line between Naksov on Lolland and Kiel is estimated to be able to compete with the newly opened ‘Fågelflyktlinjen:’ the Rödby – Puttgarden line. It is true that the crossing time is as long as 4,5 hours but ISEFJORD competes by having low costs and by having highly populated areas on both sides. The ticket prices are set somewhat lower than those of the competing line.

The ferry starts to run on the 1st of September and continues all year round on the line Naksov-Kiel. The enterprise is run by the recently formed subsidiary A/S Kiel-Naksovlinjen and the flag is Danish. The Skagen line and the management in Gothenburg are always found in the background with exciting

plans for how the Kiel service may be developed in the future.

The beginning of something great

The idea of the business model is practically unheard-of during the early 1960s. In retrospect, the Skagenlinjen philosophy may be described this way: manage service traffic for passengers with fully booked ships, where the sales on board in restaurants, bars and kiosks are maximised. With this business plan, the ticket profits are slim. Skagenlinjen voluntarily hands out free tickets since the probabilities for profits on board are so much higher.

In addition to the traditional sales, on board there are also the incredibly popular and profitable ‘slot machines.’ Every journey generates very large gains in total. The money is delivered in bags from the ships and is then transported to the bank.

In March of 1963, Skagenlinjen gets its own chimney brand, created by head of technology Helge Olofsson and the ship architect Tage Wandborg at Knud E. Hansen AS. It consists of a big white S on a red stripe, edged by two slim white stripes on a black background. The S ends in a stylised ship with a forward-facing stern. The brand will become classic and spread all over the world.

In this way, the Skagenlinjen enterprise gets its own, unified, and clear image. It contributes to the creation of an image of youth, popularity, and festivity around the new excursion trips. This is the background for the future Stena Line.