Since their start back in 1978, Mercy Ships has worked in more than 70 countries where they have provided free, world-class health care services to more than 2.5 million patients with the help of an average of more than 1,000 volunteers from up to 40 nations every year. We have decided to enter into a long-term partnership with Mercy Ships to raise awareness about the charity, promote volunteering and charitable giving both internally as well as amongst our travellers and partners.

Did you know that we in Europe in average have 3,5 doctors per 1000 inhabitants. In some parts of Africa, that number is 0,2 doctor per 1000 inhabitants. So as you can imagine, this means that a lot of people never get the help they need. This was something Mercy Ships wanted to change. “We are shocked and distressed when we see the devastation and number of lives lost in a natural disaster. But there’s a tsunami of deaths in West Africa every day. People live in fear, hopelessness and desperation, but our mandate in Mercy Ships is to transform those lives with hope and healing.” – Don Stephens, President/Founder of Mercy Ships.

Why a floating hospital?
Mercy Ships can sail directly to some of the world’s poorest people to deliver life-saving medical care and provide safe facilities in which to treat them. A large number of the poorest people in the world live within two hours from a port city so a ship coming in a nations port actually comes very close to very poor people who would otherwise have no access to medical help.

Mercy Ships comes with a fully equipped and state-of-the-art hospital that for a time serve both as education platform for the nation’s own surgeons, nurses and health-care workers but also gives life-changing surgery to thousands. The hospital is in a way an extension of the best healthcare western world nations can have.

On board the ship all crew have safety, they are provided with good lodging and great food. Mercy Ships strives to do the best job and to do that our crew, doctors and nurses and all others must eat well, sleep well and be set in a secure environment for their work. The ships provide this.

Mercy Ships + Stena Line = true
At the end of January, Stena Line’s CEO Niclas Mårtensson visited the 16,000 tonne Africa Mercy, currently docked in Cotonou Benin, to see the work done onboard. The Mercy Ship is a former Scandinavian rail ferry which was converted to a hospital ship with five operating theatres and spends ten months at a time in African port cities.

– “Having visited Africa Mercy, I am genuinely impressed by the difference Mercy Ships provide to those who need it the most. Stena Line has quite a few things in common with Mercy Ships and because we care, we want to support them in their important work, says Niclas Mårtensson, CEO Stena Line.

During the spring of 2017 Stena Line will promote Mercy Ships on the ferries throughout Europe and will develop different ways to bring awareness of this seagoing mission. An initial campaign to raise awareness for the charity will begin on the 14th of February on Valentine’s Day and additional fundraising efforts for Mercy Ships will take place during the year.

“For us sustainability is more than environmental initiatives. The partnership with Mercy Ships is an important part of this and it allows us to involve all our employees, customers and partners in making a difference. For example, via our ships and social media channels can we reach approximately 10 million people with information about Mercy Ships and we are currently setting up a program for sponsoring employees wanting to work as volunteers onboard Mercy ships’ vessels”, says Niclas Mårtensson.

In a soon future Stena Line will present a program for our staff members who would like to volunteer on Mercy Ship vessels and for our passangers to contribute during their travels with us. If you are interested to know more read our press release. 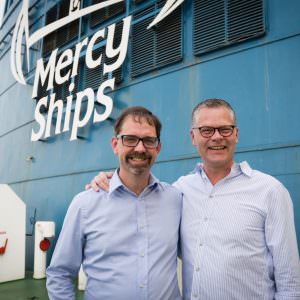 Pascal Andréasson together with Niclas Mårtensson