Sailing against the current in a time of crisis

In 1973, the world economy flourishes and the spirit of time is optimistic. The free spirit and happy 1970’s reaches an early peak. Few people can imagine that several years of crisis management are lurking around the corner. The economy is in recession, unemployment is increasing and the politics no longer seem to be able to deliver on their promises. Even the ferry industry is entering a difficult period in which several shipping companies will go under. This will not hit Stena Line as she goes against the current and succeeds in expanding from the difficult period. Below, Rickard Sahlsten and Anders Bergenek tell us about the exciting years 1973-74.

The great crisis is triggered in October 1973 by a war when Arab forces led by Egypt and Syria attack Israel. Oil prices increase more than double and reach unexplained levels. Shipping as well as the rest of society has so far based its activity on the availability of cheap oil. The rising oil prices trigger a deep socioeconomic crisis.

As the world economy slows down, the industry suffered from closures and unemployment as a consequence. The foreign exchange market is worried and interest rates begin to rise. Many companies make major currency losses, not least shipping companies in connection with the financing of newbuilds in “wrong” currencies. Stena Line, however, successfully manages the loan market and does not suffer as much from such losses.

Another problem is the sky-high Swedish wage inflation. From 1973 and several years ahead, Swedish wage costs increase in a way that is not proportional to economic developments in general. Because ferry shipping is an international activity, it is very sensitive when Swedish wage increases are significantly higher than other countries. Vessels from, for example, Denmark or Germany can sail at a significantly lower cost on the same routes as Stena Line.

Rising bunker and payroll costs makes Stena Line review how ferry costs can be reduced. One way is to use the ferries as efficiently as possible. The German ferries make day trips from Korsör in Denmark to Kiel in Germany otherwise during this time they would have been tied up at Port (not utilized). Over the summer period we operate in a similar way on the Frederikshavn to Gothenburg route. Each Danish ferry already makes three double trips a day and is therefore used very efficiently. The prerequisite for the frequent timetables is that the crew manages to streamline loading and unloading, which sometimes has to be done in less than an hour.

A classic ship name is established in Stena Line’s fleet on May 24, 1973, when STENA JUTLANDICA is delivered. With her arrival, the little STENA NORDICA from 1965 will be replaced by a normal sized Denmark ferry. The Swedish auctioneer master, Kjell Engman, auctions the right to the Christening of the vessel with a maximum bid of SEK 7,100, which will be awarded to the Lions Club for charitable purposes. Behind the bid stands Harry Danhed, whose wife, Maria Danhed, is named as the godmother of the new acquisition.

In connection with the first visit to Frederikshavn, Stena Line also take over the newly completed ferry berth 4, originally intended for the Larvik in Norway to Frederikshavn in Denmark ferry. This is a very special day in the company’s history. 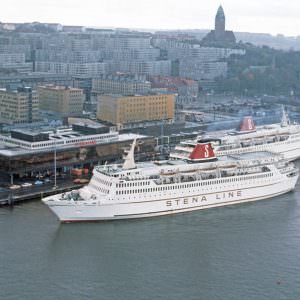 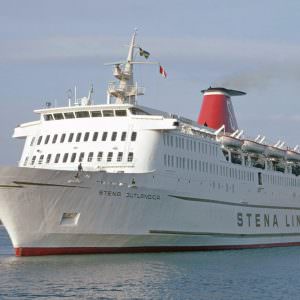 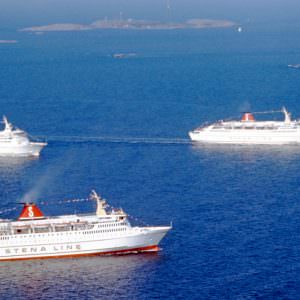 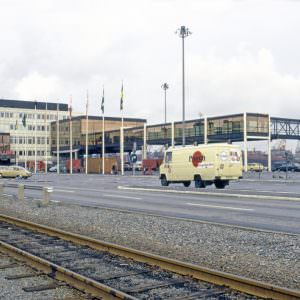 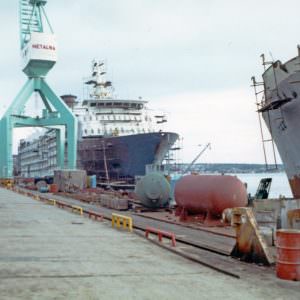 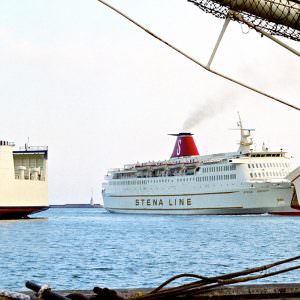 STENA JUTLANDICA is considered to be the world’s largest short distance ferry. The passenger lounges can accommodate 1,300 seated passengers. Stena Line knew about the new delivered ferries to the competitor Sessan Line’s when STENA JUTLANDICA was constructed. The new vessel offers in all respects greater capacity of Sessan Line’s vessels PRINSESSAN CHRISTINA and PRINSESSAN DESIRÉE. Even when compared to STENA DANICA from 1969, the new Frederikshavn ferry has larger capacity. The days of the older ferry are now numbered. She is replaced in June 1974 by the last Yugoslavian construction, which is the third vessel that takes over the name STENA DANICA. There is no longer any doubt as to which is the largest shipping company on the Gothenburg – Fredrikshavn route. mirziamov.ru

STENA JUTLANDICA basically has the same layout as the Kiel ferry STENA OLYMPICA , which was delivered in 1972. The only difference is that on the Stena Olympica there is a deck with cabins and on Stena Jutlandica this would be an extra cargo deck for passenger cars.

The names of the lounges on the new STENA JUTLANDICA are associated with the famous Evert Taube – Swedish singer, songwriter and he also has a passion for the sea.   On board the STENA DANICA the lounges are named after famous landmarks in Gothenburg. The interior of both vessels is similar to that of the German spheres of the 1970s saturated, colorful and often dark color tones.

STENA JUTLANDICA and new STENA DANICA are formidable cruise ferries, with great freight capacity. Here are all the economies of scale that will ensure the company’s high profitability. The vessels are built for volume and all outlets on board have great capacity to generate revenue. The new larger vessels also mean improved comfort for the passengers and more stability in rough weather. The masters also experienced the new Danish Ferries as very successful and easy to maneuver. During a trial trip with STENA JUTLANDICA, a stopwatch of 270 meters and a turning radius of 200 meters are measured.

While there is major investment on the Frederikshavn route, traffic between Gothenburg and Copenhagen ceases. Stena has received an attractive bid for STENA ATLANTICA, which is sold to Finnlines with a capital gain of SEK 10 million. The route to Copenhagen was never a success.

The beautiful STENA DANICA from 1969 leaves Gothenburg in spring 1974 to cross the Atlantic through the Panama Canal to the Canadian West Coast of the Pacific Ocean. With the trip, the ferry has more than 200 Volvo cars. The buyer is British Columbia Ferries, they deploy the ferry along the Canadian coast to Alaska. Here she sits first as the QUEEN OF SURREY and then as the QUEEN OF THE NORTH. In 2006, the ship is wrecked after sailing over an underwater reef. 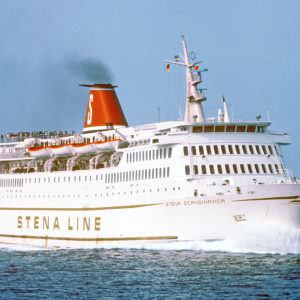 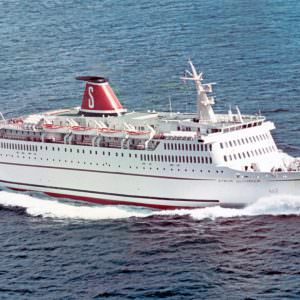 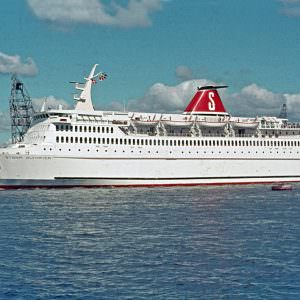 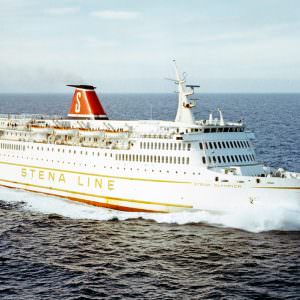 In July 1973, a sister ship was delivered to Stena Olympica and is named Stena Scandinavica. She replaces Stena Germanica, however, she will return as an additional ferry on the Kiel route for a few more summers. Now the shipping company has two comparable ferries in Germany. The night capacity of the new ferry measured in beds is 873. The vessels operate daytime also on the Korsör – Kiel line and summer time between Gothenburg and Frederikshavn. Intensive use of the vessels was one of the company’s means of meeting the cost crisis after 1973.

The new German ferries are considerably more expensive than Stena Line initially estimated. When the order was placed, the shipyard would build two vessels for less than 60 million. When Stena Olympica was ready she had cost 28 million but the sister ship Stena Scandinavica, delivered in 1973, cost 44 million. Stena Line is usually very skilled when negotiating with different yards, but Stena Line was unable to negotiate with the Communist authorities in Yugoslavia. After all, the shipping company gets the ferries at a very good price.

When renovating in 1974 at the Swedish shipyard in   Sölvesborg, the cabin capacity of Stena Olympica and Stena Scandinavica increases by 152 beds. The elegant exterior of the vessels has been made ugly at the same time and the engines are being built for heavy oil operation. This rebuilding is a good example of Stena Line’s focus on maximizing the opportunities to improve onboard spends.

Sessan Line commences operations between Gothenburg and Germany. The ferry Princess Birgitta is put into service on May 16, 1974 and goes on night trips between Gothenburg and Travemünde, departing in principle every other day. In the summer, Stena Line puts in the old Stena Germanica in 1974 as an extra ferry and runs with double capacity on the same days when Princess Birgitta sails. Every effort is made to put pressure on Sessan line, as this competition is eliminating the profit margins on Stena Lines route to Kiel. When Princess Birgitta was ordered, there was a great deal of optimism about the future traffic trend from Sweden to Germany. After the cost crisis in 1974 it is obvious that two German lines from Gothenburg cannot survive.

STENA FINLANDICA commences operations in 1973 on the Korsör-Kiel route for a few weeks only, and then returns to the Åland route. In the summer of 1973, STENA GERMANICA entered service between Stockholm and Mariehamn. She carries foot passengers only . This speculated a lot about Stena Line entering the Åland route with car ferries. This creates great concern among the established Finnish shipping companies. However, when STENA GERMANICA is needed in Gothenburg, she will return there in the fall of 1973.

STENA FINLANDICA continues on the route to Mariehamn until 31 December 1973, and then the route closes. STENA FINLANDICA gets a good charter with a German company and is sold later. It is tough competition mainly from the Åland route, which together with the increased bunk costs reduces the profitability of pleasure cruises over the Åland Sea.

Sten A. Olsson is an experienced businessman and very early on he sees the opportunities of what trading in ships entails. There are generally jokes that the entire fleet in principle is always for sale. Even ships that are in service can be sold at short notice. Ferries are also ordered without directly having any planned deployment.

During the period 1973-1974, the Stena Group supplies delivery of five freight ferries and a passenger ferry. Trondheim Mechanical Workshop delivers JARL TRANSPORTER and NOPAL SKY. JARL TRANSPORTER was supposed to strengthen the Kiel route but secured a more attractive charter. None of these ships will sail for Stena Line for a longer period of time.

When STENA NORMANDICA 1974 was delivered from Rickmer Werft in Bremerhaven as a first in a series of four ships, the ferry attracts great attention. She is the first ferry to be built with double car decks for trucks with room for up to 44 units. Even though STENA NORMANDICA is only 125 meters long, she still has a good space within the passenger accommodation with close to 800 seats and 152 beds. The larger capacity in relation to the size  of the ship can be explained by using all of the upper deck and the tailgate deck over the entire length of the ship. STENA NORMANDICA is not beautiful in traditional sense, but very flexible and can be used both as a passenger ferry and freight ferry. However she will not be fully utilized by Stena Line.

When STENA NORMANDICA appears for the press in Gothenburg on December 10, 1974, Sten A. Olsson announces to the Gothenburg Post “I can agree that the exterior design is not associated with any sea romance but to me the only sea romance when it comes to Merchant ships is the result that is shown in the annual report.

Demand for freight tonnage is almost unrealistic at this time due to the expansionary trade of the oil-producing Arab states. Not least construction equipment that are shipped to a large number of ports in the Red Sea with the freight loading being a great advantage.

To many outside viewers, uncertainty arises when it comes to these freight ferries. It is often said that the ships are delivered to Stena Line as the red funnel carries the very distinctive ’S’ logo; however, Stena Line has nothing to do with this business. The construction of and the chartering of these vessels is always managed by other organizational parts of Stena Line.

We would like to give a big thanks to Rickard Sahlsten and Andersbergenek, authors of the book Stena Line – The History of a ferry company, for this detailed description of what happened in 1973-74. / Ylva.