In the late 1960s, shipping is moving at a rapid pace into a new phase with the aggregation of smaller cargo items into larger units – on long-distance journeys into containers and shorter distances on trailers. Container ships and cargo ferries for rolling goods are becoming more common. Stena orders a cargo ferry in 1969, mainly for truck and trailer transportation on the growing Gothenburg-Kiel line. However, as a result of Stena’s unique business sense and chartering prowess, this ferry is to receive a number of sister ships and moreover form the start of what will later become the modern Stena RoRo. Shipping to Kiel never came to pass.

In April 1969, Stockholm’s shipping company: AB Svea would introduce the newly built cargo ferry Servus on the line between Gothenburg and Hull. Servus would hail from docks in the northwest corner of the Skandia harbour, next to Stena Line’s former Germany terminal and additional space for the Stena Germanica. Svea’s new construction projects were to make an undoubtedly strong impression on the Sten A. Olsson. At the beginning of 1969, the Stena Group commissioned its first cargo ferry from the shipyard: Kristiansands Mekaniske Verksted A/S (KMV) in Kristiansand, Norway.

The original idea for the cargo ferry was to relieve the Stena Germanica on the Gothenburg-Kiel line. At times, there were too many trucks in relation to the cabin berths on board, meanwhile the number of trailers were increased. Available sources tell us that the design was Norwegian, the result of a collaboration between Stena and the shipyard. It was an efficient ferry of 2500 dwt with a very appealing and contemporary design. A construction arrangement with four main engines was a completely Norwegian idea with Normo engines from Bergen, signed by Sigurd Mikkelsen, CTO at Bergen Mekaniske Verksted.

Stena’s first cargo ferry never came into service on the Gothenburg-Kiel line. The Canadian ferry Patrick Morris had sunk on 20th April 1970, and the Canadian National shipping company (CN) was in desperate need of a replacement vessel as quickly as possible. Stena’s chartering department led by Sven Lindholm had good relations with CN after the successful transaction with the first Stena Danica. Just a few weeks after the sinking, CN negotiated with Stena and pretty soon agreed on the terms for a 30 month-long charter of the new ferry. The 1st October 1970 was the agreed delivery date for the Stena Carrier, which immediately went over to Canada. 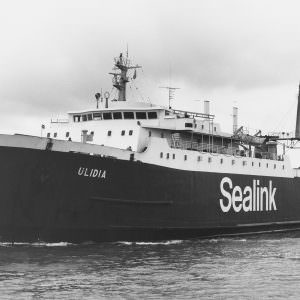 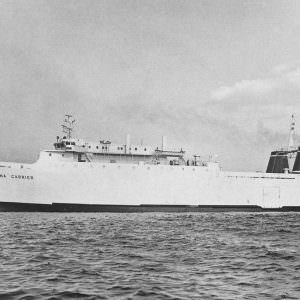 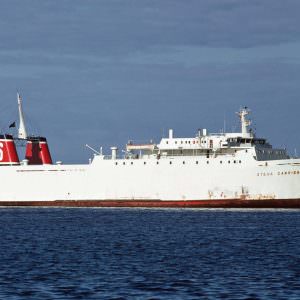 Stena’s different series of cargo ferries received names for marketing purposes and this first series was called (Stena) Seacarrier. Strengthened by the success of the first ventures, Stena place progressively more orders and come to build a total of four ships at three different Norwegian shipyards between 1970-1972. The whole series of ships was partly a result of low

employment among the Norwegian shipyards, which had previously built mainly fishing vessels. Stena Carrier 1970 in Kristiansand (KMV; number 215), Dalriada in 1971 in Haugesund (Lothe Brødrene A/S, Flytedokken; number 31) and Stubbenkammer 1971 in Brevik (Trosvik Verksted A/S, number 94). All the vessels in this series came to be chartered out to the railways in Britain (Dalriada), Canada (Stena Carrier) and East Germany (Stubbenkammer). The fourth ferry was built in Brevik but was sold to British Rail and was delivered in April 1972 as Anderida.

The Seacarrier concept came to be built in various modified versions by Finnish and Libyan shipping companies until the mid-1970s.

Stena continued to order more and more sophisticated cargo ferries, which now began to be called ro-ro ferries (with ro-ro meaning: roll-on roll-off). They quickly learned to build flexible vessels on short notice, which could be adapted depending on customer needs. As early as 1973, leadership from technical manager Sven Råwalls and chartering boss Sven Lindholm laid the foundations for the modern Stena RoRo. In the 1970s, they were to build 26 new ro-ro vessels in six different series at shipyards in Norway, Holland, Germany, Austria and South Korea.

Stena’s first cargo ferry had a long and adventurous life. After the Canadian charter expired, the Stena Carrier was sold to a British finance company in the summer of 1974 to go into service for the British railways shipping company Sealink. This was in order to handle cargo between Scotland and Northern Ireland under the name Ulidia. She was sold to Greece in 1981 and to Egypt a few years later. She returned to northern waters in 1987 where she was converted into car-passenger ferry in Norway. This was for Norwegian domestic traffic under the name Fjordveien. After a short period of service between Åland and Finland, where her name was wittily changed to Fjärdvägen (a Swedish pun on the previous Norwegian name), she was back in 1996 in Norway for service between Moss – Horten, under the name Holger Stjern. New ferries on that line caused her to be displaced further to Italy into service in the Strait of Messina. She continued after a few years to Turkey and was finally put into service across the Black Sea. The end came only in 2011, after 41 years, when she was scrapped in Aliaga, Turkey.