This is a really eventful year in the company’s history. It begins however with the decision to liquidate one of the passenger vessel routes from Gothenburg. The traffic between Gothenburg and Sandefjord had in 1964 been exciting news for Gothenburg as well as for Norwegian travellers. The politicians, however, did not look kindly upon “the liquor express” of the Skagerack. In 1965 there was a rapid reaction from the Swedish and Norwegian Ministries of Finance, and as early as March 1st they changed the laws so that the traffic was classified as medium distance. This limited importation rights greatly. With the new rules, the Norway route became less attractive and WAPPEN ran her last tour of Sandefjord at the end of February 1965.

Other passenger routes faired much better. The popular POSEIDON sails in winter and spring on the Gothenburg – Frederikshavn route. Her days are numbered, however, as the line for the summer will be upgraded to the car ferry. The Lysekil – Skagen line will be maintained during the summer by SKAGEN II. During this period Bohuslän is visited by many tourists, which broadens the basis for the much loved route. 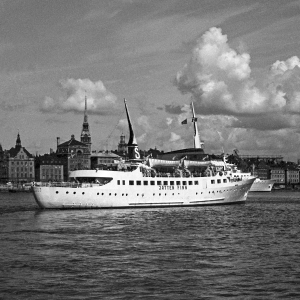 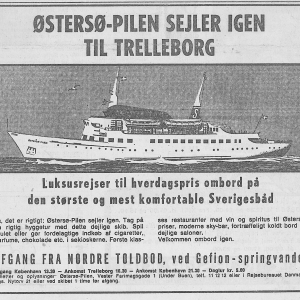 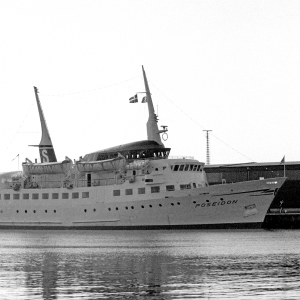 Another passenger line that does well in 1965 is the one between Trelleborg and Copenhagen. Here, however, the vessels were tightly changed in this year and POSEIDON, GORCH FOCK as well as AFRODITE ran various different turns of the routes from March to December.

As early as 1963, Stena’s technical department had, under the leadership of chief engineer Helge Olofsson, started to draw up modern ferries for Denmark’s routes. A contract to build two modern ferries was signed a year later with the French shipyard Ateliers et Chantiers de la Seine-Maritime in Le Trait outside Rouen, in February 1964. Delivery was planned for spring 1965.

When the new ferries were introduced the marketing name was changed from Skagenlinjen to Stenalinjen (Stenaline). The vessels adopt the elegant chimney brand and colour scheme from the Skagenlinjen’s ships. The concept of Stena Line will however first be introduced in April 1967.

The first delivery in 1965 from the French yard was STENA DANICA which from the 24th of June 1965 was put on the Gothenburg – Frederikshavn route with two trips in each direction. This vessel represents a completely different threat to the established competitor Sessanlinjen. Now the shipping companies are battling for the same passengers and above all for the same freight customers. One problem for Stenalinjen is that Stenpiren is not built to handle large amounts of cars and lorries. STENA DANICA will therefore be forced, after leaving Stenpiren, to enter Sannegårdshamnen in Gothenburg, in order that it can take lorries on board. 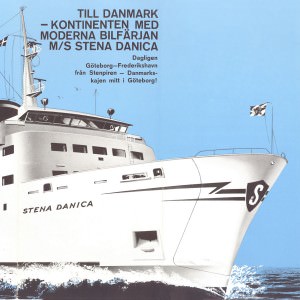 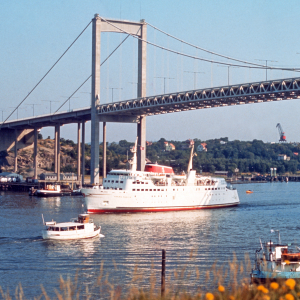 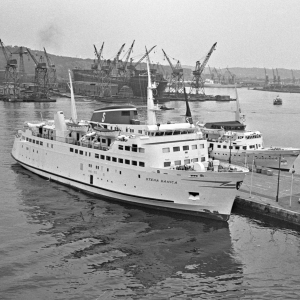 Stenalinjen is now developing the leisure and entertainment facilities onboard to a more sophisticated level. Advertisements offer an exclusive Top Floor Bar, Kattegat Supper in the restaurant with Laxtoast (salmon sandwich), Chateaubriand, and Moulin Rouge all for the reasonable price of 12 Swedish crowns, damcomplé for 5 crowns, as well as roulette and bingo. Both the grocery shop and the duty-free sales are open throughout the journeys and the Bel Air Saloon offers dancing to live music. With this arrangement it competes not only with Sessanlinjen but also the nightlife in the country. A modern ferry movement is established.

Typical for the Stena Corporation is that the ships do not always end up where they are supposed to. A sister ship to the STENA DANICA was delivered in June 1965 with the name STENA NORDICA. Obviously the shipping company did not assess the economic viability of operating two car ferries on the Frederikshavn route at this time.

It had previously been said that the new ferry would run the Nakskov – Kiel route. Putting her on Gothenburg – Sandefjord was then later discussed. During the early spring of 1965, the Stockholm – Naantali had, for a while, been up and running. Eventually it is decided that the STENA NORDICA will open a line across the English Channel between Tilbury and Calais. Tilbury is located at the mouth of the Thames near London, which is an attractive destination for French people. In the British capital is also a huge travel base. Tilbury’s location on the north Thames bank also makes the line attractive for motorists coming from many parts of the United Kingdom located north of London.

Stena calls the new route and its ferry “The Londoner”. The name is linked to the British term for a person from London as well as a very popular British song called “Maybe it’s because I’m a Londoner.” The fact that the route is set up as a summer route shows that the shipping company primarily regards it as a passenger route for holidays and day cruises. 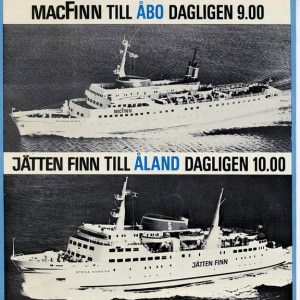 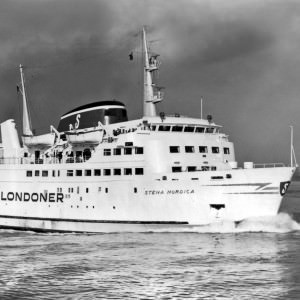 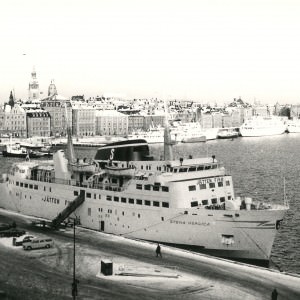 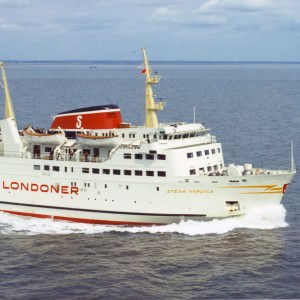 In addition to ticket sales, revenue is also expected, like in Scandinavia, to come from duty-free sales, onboard serving and from games such as roulette and bingo. The sale is there again not expected to reach the same levels as for example in the Gothenburg – Frederikshavn.

On June the 30th 1965 STENA NORDICA initiates her career as “The Londoner” with a giant party for 700 invited guests on the Thames beneath Tower Bridge. Such is the tradition at this time for significant ships that will join the vessels in service in the UK. They must be shown in London for the media and the public.

Traffic continues in 1965 for about three months until the beginning of October. “The Londoner” proves to meet expectations and is profitable enough for there to be reason to continue to operate the route next year.

At the same time as Stena’s passenger business grows, so too does the ambition to concentrate traffic routes with better conditions for year-round operation. Sten A. Olsson in the middle of the 1960s sees a large base in an entertainment-oriented route to Åland starting from the Stockholm area with nearly one million inhabitants. At the same time as the Denmark traffic from Gothenburg converts to the car ferry, prime tonnage becomes available

Any sort of recreational routes in the modern sense do not exist in Åland at this time. The traffic there is limited to the summer and caters to a more mature audience that largely comes to Stockholm in groups travelling by bus. The nightlife in these vessels is confined largely to card games, soft drinks and accordions. Shopping possibilities are limited. The field is open to Stena with a much more comprehensive concept for entertainment and sales on their crafts.

In February 1965 negotiations are initiated with the Port of Stockholm regarding a quay for the passenger ship HELGOLAND which will be inserted in daily passenger service on the Stockholm-Mariehamn route. The addition is berth 8/9 at Stadsgården near Slussen. Traffic with HELGOLAND begins on 23 March with the marketing name “Giant Finn”. On Walpurgis Night on April the 30th, relief came to the Mariehamn route in the form of WAPPEN, having just completed Norway traffic, and she, too, is marketed as “Giant Finn”. At 22 knots WAPPEN is the fastest passenger ship on the Baltic Sea. Capacity is not bad either – 1700 passengers. The results are not long in coming. Passengers come streaming to travel with the large vessel to Åland, although Stockholm’s audience is not quite as easily convinced as Gothenburg’s.

It could hardly be said to have been the plans for the car ferry traffic that made STENA NORDICA, having just finished her first season as THE LONDONER, come to Stockholm at the start of October and replace WAPPEN on the Mariehamn route. It was rather that the shipping company wanted to find out what potential there was in traffic to the Finnish mainland. WAPPEN was now moved over to the Stockholm-Turku route with the marketing name “Mac Finn”.

With her speed capabilities, she can leave Stockholm at 09:00 and be back the next day at 07:00. The traffic to Turku continues until St. Lucia Day (13th of December) in 1965 and in Mariehamn until Christmas, when the harsh winter puts a stop to it. The Turku route is then stopped for good while the more profitable traffic in Mariehamn continues.

On the 1st of January 1965 the Danish government introduced a three-day rule for the admission of duty-free goods. This affects Stena’s plans. In February 1965 a newspaper announces that the Nakskov – Kiel route will get a new ferry from the French shipyard in the summer. As early as the end of March, the press are reporting that there will not be a French ferry on the Nakskov – Kiel route, but instead in June the newly Norwegian-built STENA BALTICA will be put in service on the triangular Nakskov – Kiel – Faaborg route. ISEFJORD will be moved to a new route, Malmö – Copenhagen. The newly built vessel from Norway, however, gets delayed, and will actually be supplied a year later. It therefore the old ISEFJORD again that continues traffic between Nakskov and Kiel in 1965. 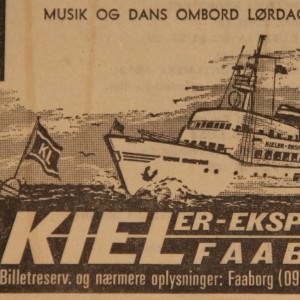 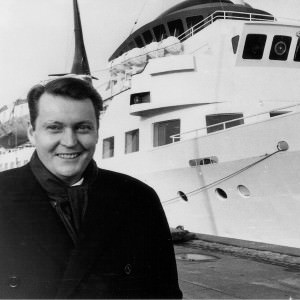 The passenger AFRODITE must remain in the southern Baltic Sea over the summer, and provides service for at Faaborg-Flensburg despite tariff restrictions.

The Kiel route feels the press in 1965 from increasingly tough competition. A newly established German shipping company runs with a newly built ferry between Bagenkop and Kiel. The Swedish shipping company Skandinavisk Linietrafik which is part of Sveakoncernen, has also established itself in this service area through the line Korsör – Kiel. In the spring of 1965 they add a second, chartered ferry. The Stena Corporation responds by officially beginning to phase out the Nakskov – Kiel line. In addition, ISEFJORD is put up for sale. In the autumn of 1965, all employees at the Danish company are given notice of termination.

After the summer season’s ends in September, ISEFJORD stops. This does not mean that the intention was to leave the German port altogether. Next year, Stena plans to start a route between Gothenburg and Kiel.