During the winter months, several of our ships enter the dry dock for their annual inspection and refurbishing. One of these is Stena Danica. While she’s being pampered at the shipyard, Stena Gothica, along with Stena Jutlandica and M/V Gute, are keeping up her route, Frederikshavn-Gothenburg. Who is this trusty ole dame? Our history experts Rickard Sahlsten and Anders Bergenk reveal Stena Gothica’s storied past.

Stena Gothica entered the world in 1982 in a shipyard in Italy. The Greek owner gave her the name Lucky Rider, and she was to serve as one of the early ropax ferries. Freight ferries at this time often only accommodated 36 passengers, but Lucky Rider had capacity for 1350 lane metres (approx. 80 lorries) and 80 passengers. This high capacity made this ferry, and her sister ship, highly sought after in the charter market.

In her very first year, Lucky Rider was chartered up in Sweden. Rederi AB Nordö put her into traffic on their new Malmö-Travemünde route, along with Svealand of Malmö, a ship that would eventually have a long and successful career with Stena as the Stena Seatrader. The Greek owner’s business soon collapsed and Lucky Rider was bought by Stena.

After a much-needed revamping, she was dubbed Stena Driver and began operating along the Gothenburg – Travemünde route. The following year, however, she was sold to British Sealink and was named Seafreight Highway between Dover and Dunkerque and Dover and Bruges. After a few years, she was sold to a Bulgarian shipping company where she maintained an anonymous existence in the Mediterranean and the Black Sea. Then in 1990 she was bought by Swedish interests and was named Nordic Hunter. 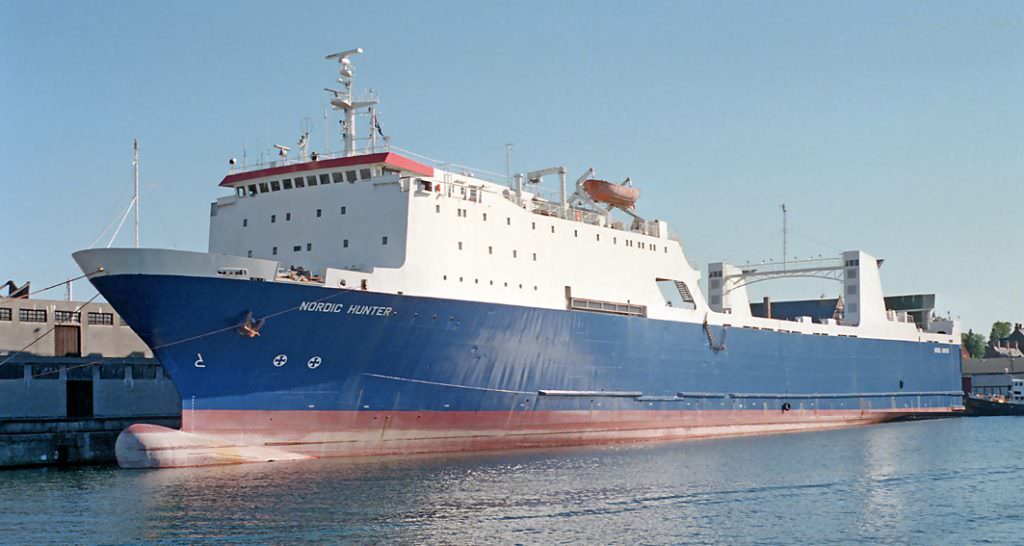 In 1991, Danish DSB took over and refurbished Ask, as the ship was now called, and used her as a passenger ferry. She now had passenger salons for 548 passengers and a big side door in the bow. Previously all loading and unloading had been done via the stern gate. She then continued in Danish domestic traffic between Aarhus and Kalundborg.  In 1993, Ask received a much needed update in the form of new machinery.

In 1999, Ask began an assignment on the Baltic Sea. The ferry sailed from Danish, German and Swedish ports to the towns Liepaja and Ventspils. Two years later she was extended by about 20 metres. In 2002, Ask was back at Nordö on the Malmö-Travemünde route. The following year, Stena Line used her for the subsidiary Scandlines on the Trelleborg – Travemünde route. Then she was for a number of years in traffic from Sweden and Germany to Baltic ports.

In 2015, when the veteran Stena Scanrail on the Gothenburg – Frederikshavn route was thought to have lived its full life after 25,797 trips in Stena Line traffic, the company searched for a suitable replacement. They chose Ask, by now a Stena veteran, which then received the Swedish flag and the new name Stena Gothica. She was introduced as a freight ferry on the Gothenburg – Frederikshavn route. This flexible vessel has since been employed on some other Stena Line routes, but her “home” is considered to be in Gothenburg.

As usual, we would like to thank Rickard and Anders for their detailed historical insights. Rickard is the chairman of Klubb Maritim (in Swedish), and is also responsible for our archives. Speaking of the dry dock season, want to know how a dry dock works? Read more here and check out our video on this topic. / Ylva.