Stena Line in our hearts

We have noticed that you have an interest in our ferries and our history. Therefore, we have invited the authors of the book “Stena Line – The story of a ferry operator”, written by Anders Bergenek and Rickard Sahlsten on this blog. This post offers background information to our history and it is the first in a series of posts about both the company and the ferries. Happy reading!

Stena Line is a famous name. Similar to H&M and IKEA, it’s a company that emerged following World War II, from Swedish soil, to become a world leader in its field. Each year, 11 million passengers travel on Stena Line ferries. These are joined by 2.2 million passenger cars and 2 million trucks. If all of the vehicles that travel with Stena Line would be lined up one by one, it would cover the distance of Gothenburg to Australia and back again!

Many believe that Sten A. Olsson, who started the company, was a regular Gothenburger that started with two empty hands. Nothing could be more wrong. When the ferry business started in 1962, Sten A. Olsson worked for 20 years in the scrap industry and ran a successful company called Stena Metall. This could possibly have been sufficient for him to be realized among the biggest names in Gothenburg. Sten A. Olsson was not entirely new in shipping. In roughly 15 years he had also operated a small shipping business with a handful of smaller freighters.

The predecessor of Stena Line was called Skagenlinjen as it’s first traffic was a passenger line in Gothenburg – Skagen. When the company’s first real car ferries began service in 1965, it was marketed under the name Stenalinjen. A few years later, the name was internationalized to Stena Line. 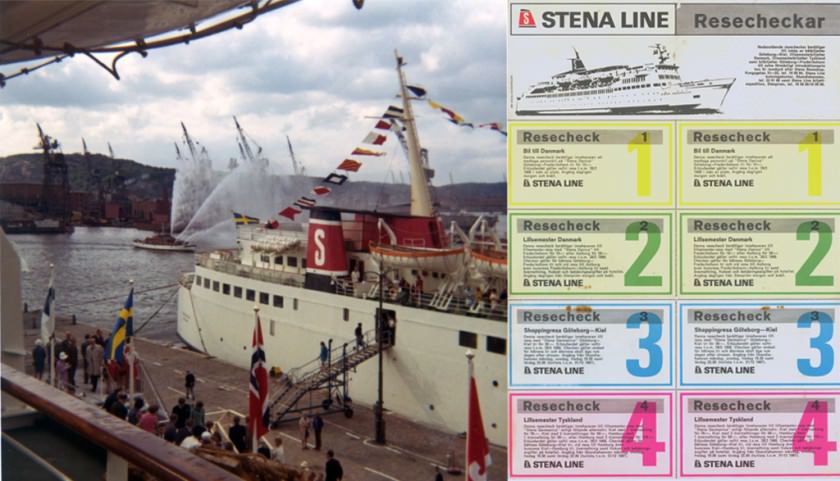 Initially, the business idea was very simple. Skagenlinjen sailed with fully loaded ships with attempts to maximize sales onboard. However, Sten A. Olsson was one of the first to realize that the ticket sales were not the major income. Passengers were prepared to spend a lot more money on consumption onboard than they were prepared to pay for the tickets. This meant that it was smart to hand out free tickets. The future Gothenburger could not resist the temptation to take a free trip. Once aboard, he or she would eat the beef fillet with bearnaise sauce, drink beer and schnapps and act accordingly to their tax-free rations of alcohol and tobacco. In the beginning, food was also sold onboard and it then became apparent that many expensive bags were carried ashore.

This way, the money was flowing into Skagenlinjen, Stena Line’s predecessor. Sten A. Olsson was the epitome of a contractor and invested all of the time gains into newer and larger vessels that would be employed in more and more lines. From the scrap industry, Sten A. Olsson had learned that high volumes created the really big profits.

The Conservatives ship-owners circuits in Gothenburg did not take the Sten A. Olsson and his passengers seriously. The operation was aimed at the masses and it offered no real status. It was about buying trips that weren’t considered to be “nice” or “real” tourist or business travel. The vessels were exchanged at a high rate. So this couldn’t be how a serious shipping business is operated?

1965 saw the replacement passenger ships with the modern car ferries. In Gothenburg, Stena Danica became the first ferry. Instead of Skagen, she sailed from the much larger and more efficient port Frederikshavn. The old owners in Gothenburg had not taken Sten A. Olsson seriously before, so now this had all changed. Stena Line suggested that in this situation directly with Sessanlinjen about customers’ favor. People’s shipping suddenly challenged establishment. 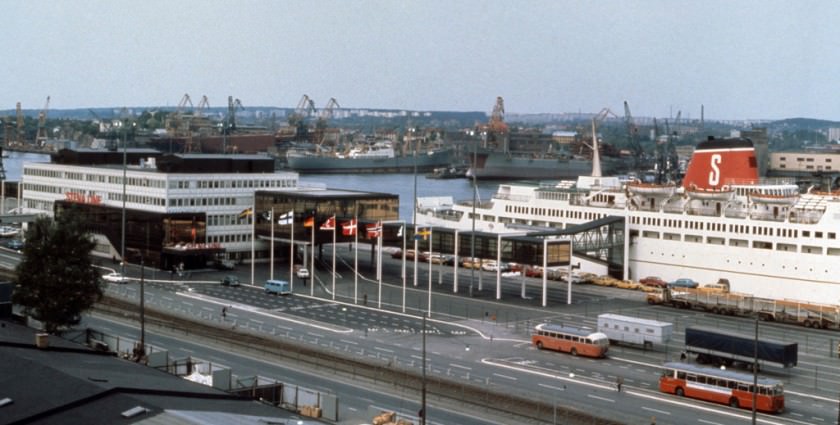 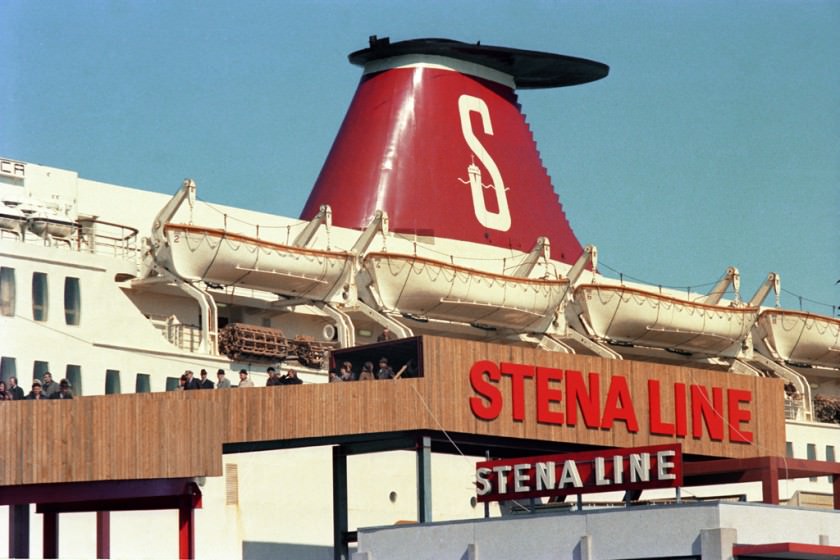 The battle with Sessan lasted until 1981, when Stena Line bought Sessanlinjen and had in fact created a monopoly for traffic on the Kattegatt between Sweden and Denmark. The interesting thing was that had now changed the management of the Stena Line business idea so it would be a travel company that offered both service and quality. In 1960, newcomers started to mature. A few years later Dan Sten Olsson succeeded his father as CEO. By then he had been working for the group for almost 20 years that he knew his own pockets.

Now Stena Line is ready to go from being a fairly local Gothenburg company to being a major international company. The Scandinavian market was considered to be saturated. Instead, they bought 1989-1990 Canadian British Columbia Steamship Company, Dutch Stoomvaart Maatschappij Zealand and British Sealink British Ferries. In doing so, it wouldn’t be an understatement to say that Stena Line became the world’s leading ferry operator.

The international effort was initially quite difficult. The purchased companies were not very efficient and it took several years before Stena Line had managed to impose its own high standards on the new activities. Stena Lina was also forced to sell or rationalize away parts of the route network. It retained two Dutch lines to England, and traffic between England / Scotland and Ireland / Northern Ireland. In 1995, Stena Line also had traffic between Karlskrona and Gdynia and were thus a foothold in the growing market in Eastern Europe.

One of 1990’s major issues in the ferry industry would be the settlement of tax-free sales on the ferries. Stena Line lobbied to postpone the decision on the future because of tax revenues were so important to the company. Meanwhile, preparations were made by wagering tonnage with relatively larger cargo capacity and lower seating capacity. It was mainly on trucks Stena Line expected to continue to make money. Meanwhile the shipping company invested with great force on high speed ferries with a passenger and cargo capacity that had never been seen before. The shipping company was perhaps the best prepared when tax-free sales ended in 1999.

Despite the large economic decline. Passengers admittedly loved high speed ferries but they were unable to charge fares that made them profitable. In many ways, during the 2000s first years Stena Line started building new business models. The transition was painful but became successful.

Today’s typical passenger on a Stena Ferry is a truck driver. 25 years ago it would have been a cruise passenger. 50 years ago it would have been a shopping traveler. Stena Line is now much more a shipping company than what it was originally. At the same time it can accommodate for passengers to offer a good travel experience, especially with the influence of good food and drink. “Border Shop” has now moved onboard the ferries which offers great opportunities for shopping.

Stena Line’s big challenge for the future is to make the ferries move to green and environmentally friendly activities. As it has previously done so many times, the shipping company is going its own way. Starting with Stena Germanica using methanol as a replacement for fossil fuels. Methanol has for some decades been held up as the natural replacement for oil and gasoline. No one, however, really pushed the issue. Perhaps Stena Line got a headstart of something big?

Stena Group currently conducts extensive shipping operations with tankers, offshore, bulk and ro/ro. Stena Line practices only a small part of a larger maritime activities. The traditional Gothenburg Lines, which once looked down on the cheeky upstart, are now all gone. Stena’s headquarters are still in Gothenburg. The company is one of the best examples of Swedish entrepreneurial spirit after World War II. Ownership remains with the Olsson family. The brand is known around the world just like IKEA and H&M. It is a real Göteborg “success story”.

I would like to take this opportunity to thank Anders and Rickard for this nice post. Their book, Stena Line – The story of a shipping company, can be bought here http://breakwater.se/alla-publikationer/fartyg-och-rederier/stena-line-historien-om-ett-farjerederi.html. Rickard http://klubbmaritimgbg.se/Blogg_1.htm also chairs Club Maritim Gothenburg http://klubbmaritimgbg.se/. The members of the Club Maritim do not know whether or not shipping is worth knowing and caring for an incredibly awesome archive. Keep an eye out here on the blog and our other social channels for the next post from Anders and Richard.

What do you want to know more about when it comes to our history and our ships? / Ylva.