From the Ship of Hope to Galapagos Legend

She started her career in the 60s as a passenger ship in the North Sea, chartered to us at Skagenlinjen and then converted to a hospital ship — a predecessor of our partner, Mercy Ships — treating civilian patients during the Vietnam War. It was there she came to be called the Ship of Hope. We bought her back, renamed her Stena Finlandica and put her on the Stockholm-Mariehamn route. Fast forward to today, she leads quite the life as a cruise ship between Ecuador and the Galapagos Islands. Below, our history experts Rickard and Anders tell her story.

None of Stena Line’s ships have come close to the dramatic history of Stena Finlandica. The occupations have been various for this beautiful passenger ship, which was built in 1963 and named Helgoland by the Hamburg-based shipping company HADAG. The vessel was planned for the Cuxhaven – Helgoland route. The Germans called this type of passenger ship “Seebäderschiffe” – resort ships. These were small to medium-sized passenger ships that transported tourists from the North Sea coast to islands such as Helgoland, Sylt or the Frisian Islands.

The island of Helgoland

The island of Helgoland has experienced a markedly dramatic history as well. Historically, the island has been both German and Danish. In connection with the Napoleonic Wars, Britain managed to put the island under its own control. Then through the Helgoland-Zanzibar Treaty in 1890, Germany assumed ownership of the island. Protecting the Kiel Canal was one of its most important purposes. The island was extended/rebuilt into coastal fortress and, later, a naval base was added. During the First World War, the population was evacuated, but returned during the interwar period. The island was completely destroyed by British bombings in the spring of 1945. The British also occupied the island and even tried to blow it up. In 1952, however, Helgoland was returned to Germany and became a popular destination for bathing, bird watching, military history tourism and much more.

In the summer of 1963 Helgoland sailed between Cuxhaven and Helgoland. On the island, the ships had to lay anchor while the passengers were transported to land in smaller boats. Outside of the summer season, traffic to Helgoland was moderate and so it was common for the vessels to be chartered. This was how Helgoland came to serve with Stena Line’s predecessor, Skagenlinjen. She was put in traffic in the fall of 1963 on the popular excursion route between Gothenburg and Frederikshavn. During autumn 1964, the ship was chartered and served the routes Gothenburg-Larvik and Gothenburg-Frederikshavn. During a month in the spring of 1965 Helgoland also sailed on the Stockholm-Mariehamn route. 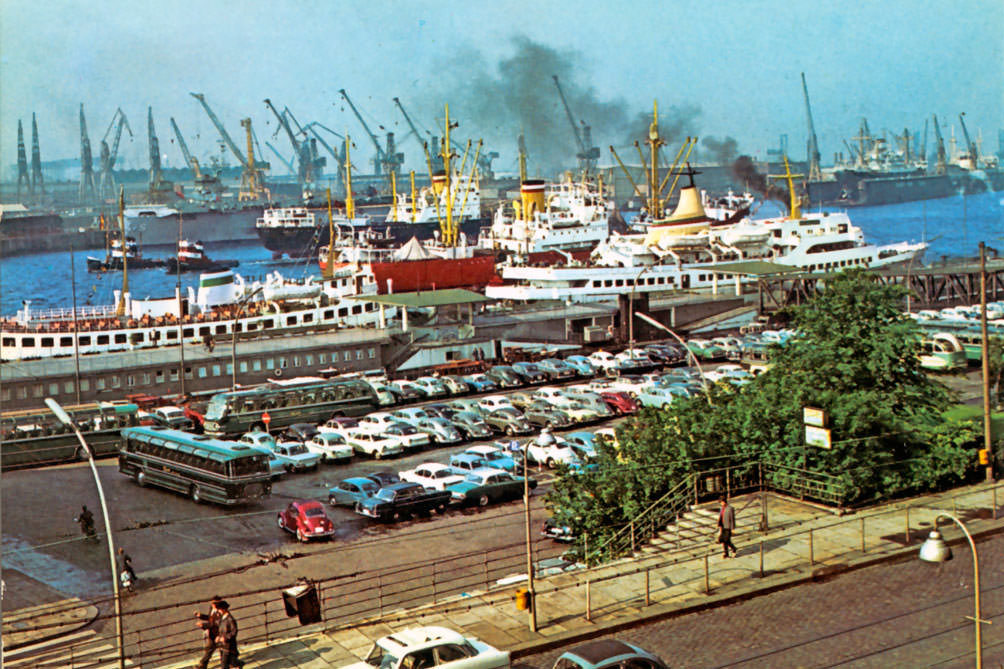 The ship of hope in Vietnam

After another summer season, as the “Seebäderschiff”, Helgoland was chartered in 1966 by the German Red Cross and converted into a hospital ship. The reason behind this was that the United States had invested such significant resources in the Vietnam war that President Lyndon Johnson demanded that the country’s allies, including West Germany, contribute to the war effort. After World War II, it was sensitive to position German combat formations abroad. The West German Federal Chancellor Ludwig Erhard forwarded the idea that West Germany would contribute a hospital ship in Vietnam. Foremost focusing on treatment of civilian patients, but in certain situations it would be necessary to care for soldiers as well. The vessel would be strictly neutral and receive patients from both South Vietnam and the FNL guerrillas.

Helgoland was thus converted to a hospital ship with three operating rooms and 150 beds. On board, clinics were established for surgery, internal medicine, gynaecology and radiology. Laboratory facilities and X-ray machines were also installed. The crew consisted mainly of German staff, but Vietnamese nurses were also employed, inter alia, to enable communication between patients and German staff. The healthcare system of South Vietnam during the war had all but collapsed. The hospitals had insufficient staff, insecure power supply and awful hygienic conditions. It was in this context that the Helgoland came to be known as the Ship of Hope. 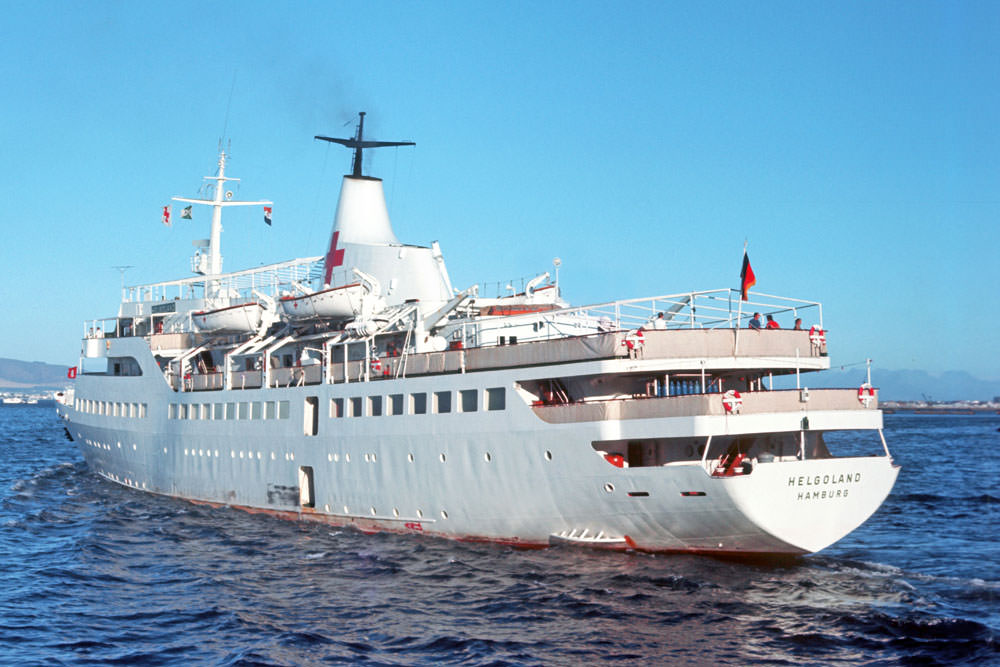 From autumn 1966 Helgoland was stationed in the South Vietnamese capital, Saigon. About a year later she moved north to Da Nang. Saigon already had the country’s best possible healthcare resources and the need was far greater in Da Nang. For several years, German staff met Vietnamese patients with many diseases, TB among them. People also came into contact with the horrors of war in the form of napalm-burned patients, land mine injuries and more. Caring for severely injured and orphans left a significant impact on the German staff.

Helgoland fulfilled the role of a hospital ship. However, the narrow corridors and stairwells were difficult to work with. In order to be more protected, the ship often went out to see to lay anchor at night. When the Pacific Ocean typhoons arrived, the little ship’s heavy rolling became a problem for people who had their broken legs stretched/in cast. Overall, however, the healthcare mission was a success and many Vietnamese lives were saved. A total of 11,000 patients were hospitalised in Helgoland in the years 1966-1971. Another 200,000 were helped in its public ER.

From the beginning of 1970s, it was clear that the United States was losing the Vietnam War and planned to withdraw. This also meant that in autumn 1971 it was time for Helgoland to sail home. In a surprising turn of events, the ship was sold to Stena Line in Kiel. At the takeover on March 30, 1972, the name was changed to Stena Finlandica. The vessel was, of course, rebuilt to be a passenger ship again. Only on June 7, 1972 was she ready to be placed on the Stockholm-Mariehamn line. Here, Stena Finlandica replaced the relatively young Poseidon.

It was important for Stena Line to put a bigger passenger ship on the Mariehamn line. The competition was intense since the Åland Line 1971-1972 had launched the big, attractive passenger ships Princess and Baronessan between Stockholm and Mariehamn. On the promenade deck, Stena Finlandica had a buffet restaurant, two lounges and a big cocktail bar with a dance floor. On Bootsdeck there was a cafeteria and a kiosk center. There was a large number of seats but no cabins. 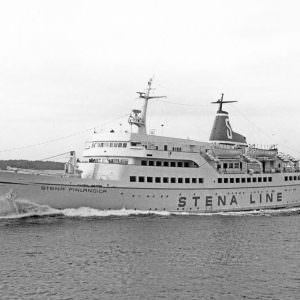 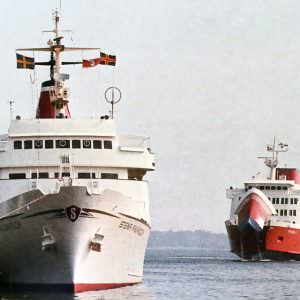 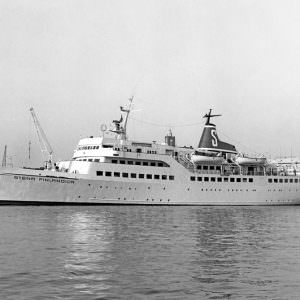 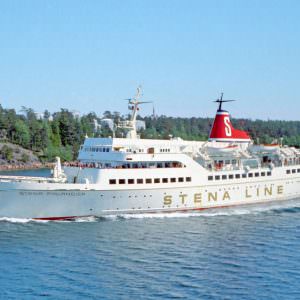 During a few winter months in 1973, Stena Finlandica sailed Kiel – Korsör while there was low traffic to Åland. However, she was to serve in Finnish traffic for only a short two-year period. Sky high freight fees and the risk of oil rationing led Stena Line to charter Stena Finlandica to Lübeck-based Förde Reederei Seetorustik GmbH. Her name was changed to Baltic Star and she entered traffic on the Travemünde – Rödby route. The Germans dubbed this form of travel “Butterfahrt” – the “butter cruise”. These were trips where German passengers could buy and take home Danish groceries, as food prices in Denmark were much lower, especially for butter.

Whereas Helgoland had previously gallivanted around the world, she became a real habitué in Travemünde, now as a Baltic Star, where she was often seen at a dock when the ferries from Sweden passed by. During one period, trips were also conducted on the Travemünde – Warnemünde line, which merged the two classic seaside resorts together. In 1999, the EU became a union, which meant German travellers no longer needed to go to Denmark in search of favourable prices.

A year later, Baltic Star was sold to the Cayman Islands. She was converted into a cruise ship with 98 beds. With the name Galapagos Legend, she started conducting cruises from Ecuador to and around the Galapagos Islands. Here, the 54-year-old ship is still sailing and is described fondly by the company that now owns it:
“This magnificent vessel has the charm of the Enchanted Islands. It’s small enough for a more intimate experience with friends and family. The Galapagos Legend offers a great variety of comfortable and spacious areas. Its fantastic open decks allow you to view the islands’ flora and fauna or enjoy a BBQ and relax in the sun at the pool area. ”

The Ship of Hope seems to have been transformed into the cruise ship of dreams.

As usual, we would like to thank our experts, Anders Bergenek and Rickard Sahlsten, for this extensive history and great pictures. As members of Klubb Maritim they take care of our archives and contribute these stories. <3 / ylva.